What if you had a dream to ride your bike on all seven continents? Antarctica may not seem like a bucket list destination for biking enthusiasts, but it was one passenger’s dream to tick that box.

Bob Briggs joined us on our Antarctica Peninsula Express voyage in December 2019, and much to his surprise and joy, we found him a bike so that he could achieve his dream. Here’s his story: 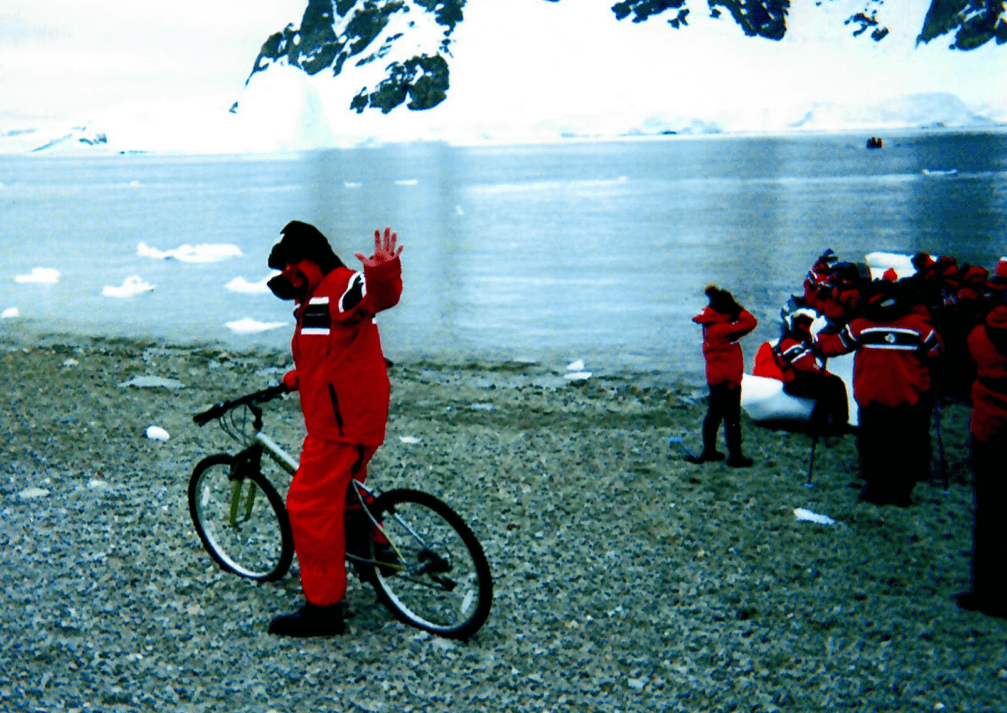 My name is Bob Briggs. I am 74 years old.  I was born and raised in Pittsburgh, Pennsylvania but moved to Lakeland, Florida in 1974 after college, 4 years in the Navy and graduate school at West Virginia University.

At age 29, I was woefully out of shape, smoking, drinking, no exercise and generally feeling sluggish continuously.  I began cycling, after running for years previously.  Then it expanded to doing triathlons.  When I retired in 2001, I made a commitment that I was not going to languish at home watching TV. The turning point came when I read an article in Outside magazine featuring the 50 things you need to do before you die.  Much to my surprise, I had already done about half of them and the other half mostly consisted of interesting and adventurous activities. I had already biked across the U.S. when I was still working and was still doing triathlons so it only made sense to combine two of my passions – travel and fitness.

Pedal to the Metal

India was first. It was in India that I overheard this women sharing information with another cyclist about the longest bike race/tour in the world, from Cairo, Egypt to Cape Town, South Africa. That was not when I decided to bike all seven continents, but it was the beginning of doing ridiculously long bike tours. Since I found myself on the other side of the world, I decided to proceed down through Malaysia onto Australia, Tasmania, North New Zealand and South New Zealand. I then did the Africa tour after returning from New Zealand.  After Africa I was pretty much sold on the Tour d’Afrique tours which had now added the Silk Route (Cartagena to Ushuaia), the Silk Route (Shanghai to Istanbul) and the Orient Express (Paris to Istanbul).

The owner of the cycling tour company was actually considering a fat tire trek across Antarctica.  He eventually came to his senses and cancelled this impossible quest. The thought did occur to me that I had biked across six of the seven continents.  Since the Antarctic tour was mercifully cancelled, I decided that the next best manner to do all seven continents would be to fly to Ushuaia, cross the Drake Passage with Polar Latitudes and if I’m lucky, get a picture of myself at least “on” a bike in Antarctica.

Pablo to the Rescue

While crossing the Drake Passage, I cornered Pablo and asked him if by chance they had a bicycle on board the Island Sky.  He said he doubted it but he would “look into it”. No more than fifteen minutes later he hunted me down and informed me that they indeed did have a bike on board.  Nothing more was said about it and certainly nothing was formally planned but when we finally set foot on mainland Antarctica there was already a bike resting on a snow bank awaiting my arrival.  If anyone can make things happen, you can count on Pablo.

I handed my disposable camera to our Lithuanian piano player (Indra) who kindly took pictures of me on the bike until the film ran out.  It actually happened.  All seven continents. I was only able to pedal a few yards on a pebbled shoreline but it was the best I could do under the circumstances.  No fanfare or publicity but I wasn’t seeking any of that.  My bucket list is now complete.  How many people can make that claim.  I am very fortunate and greatly appreciate all those Island Sky staff who made it possible.

Bob took the time to express his deep gratitude to Pablo and Maru personally as well as the rest of the staff. He said, “the most important thing for you to know is that your staff is incredibly accommodating and without comparison.”

Interested in booking a trip to experience our world-class guest experience? Contact your preferred travel professional or reach out to us here.